Adjaye Associates has won planning for 5 Strand, a block of offices and flats at the south-eastern edge of Trafalgar Square.

The 158,000sq ft scheme, for investor BlackRock – the investment management giant paying former chancellor George Osborne £650,000 a year to work one day a week – will include 26 flats on the top four storeys, above six floors of office space and, at street level, a cantilevered retail colonnade.

Adjaye described the colonnade as a “contemporary re-interpretation of the arch motifs frequently used in the locality”.

He said the development, which is in a conservation area and surrounded by grade I and II buildings, would begin to “restore the Strand’s architectural confluence as a core power axis in line with that of The Mall, Whitehall and Pall Mall”. 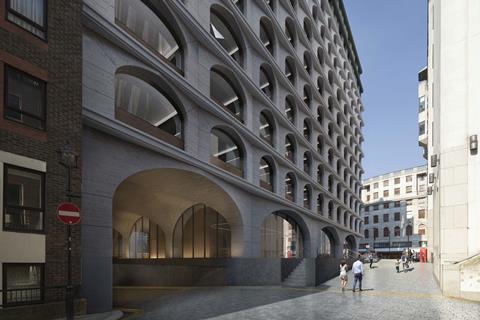 The building’s height and roofline respond to its neighbours, with particular consideration given to the view from Trafalgar Square and the National Gallery.

Laura Marino, creative director and co-founder of development manager Alchemi Group,which has managed the planning process, said the architecture was “unlike what is currently being built across London”.

“It was crucial to come up with a building that addresses the importance of the site itself and would stand on its own without overshadowing its immediate surroundings nor the conservation area.”

The offices are aiming for a Breeam Excellent rating.

The planning win comes two years after a mixed-use scheme opposite the Ritz in London’s Mayfair by Adjaye was approved by the same council. The work involves a £600 million redevelopment of an entire city block for Crosstree Real Estate Management.