Government and EDF agree deal for new nuclear plant, with more than half the value of project to go to UK firms 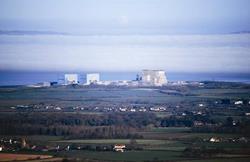 The government has struck a long-awaited deal with French utility EDF for the £16bn nuclear power station at Hinkley Point in Somerset.

The deal, announced this morning, follows an agreement over the price of electricity that will be generated from the new power station, or the so-called ‘strike-price’.

Under the plans the government has guaranteed a price of £92.50/Mwh for the price of the electricity from Hinkley - fully indexed to consumer price inflation - more than twice the current price of electricity.

This will fall to £89.50/Mwh if EDF moves ahead with a second plant, Sizewell C in Suffolk.

The deal also confirmed that the project will be underwritten by the government through the UK guarantees scheme, with Treasury-guaranteed debt expected to finance 65% of expected total costs prior to operations.

Speaking to BBC’s Radio 4 Today programme, energy secretary Ed Davey said that “a key part of our negotiation” was that up to 57% of the value of the project would go to UK firms.

“We’ve gone through in minute detail the value of this project and looked at the contractors they are going to use,” he said.

The agreement now paves the way for EDF to make its final investment decision to go ahead with the £16bn power station which, when completed in 2023, will provide 7% of the UK’s electricity.

EDF said this morning that it would make its final investment decision by July 2014, with the power station expected to complete commissioning of the first unit in 2023.

EDF said the construction cost of the two nuclear power units at Hinkley Point is expected to be £14bn, with a further £2bn of other costs, including land purchases, achieving the different consents, construction of a spent fuel storage facility and preparing the 900-strong team which will run the station.

Two Chinese investors - China General Nuclear Power Group and China National Nuclear Corp - are now expected to acquire stakes in the Hinkley project, which together will be worth up to 40%, along with the French nuclear developer Areva, which is taking a 10% stake.

EDF’s stake will be around 45-50%, with the firm in talks with a shortlist of further investors, who could take a stake worth up to 15%.

Meanwhile, Costain confirmed this morning that it had won the £250m marine works contract for the project, which will see it design and deliver the water cooling systems for the nuclear power station.

Costain will design and construct three marine tunnels, around 11km in total length and each one approximately seven metres in diameter, to take in cooling water from the Severn Estuary for the nuclear reactor before it is cleansed, recycled and returned.

It is expected that work will commence as soon as possible following the final investment decision.

Andrew Wyllie, Chief Executive of Costain, said: “We estimate that this contract will lead to the creation of hundreds of new jobs at Costain alone, including apprentices, specialist technical and engineering roles and programme management.

“We are very much looking forward to working with all our partners in this project to design and deliver a world class power station at Hinkley Point.”

Last year a joint venture between Bouygues and Laing O’Rourke won the £2bn main civils contract for the project.

Industry reaction to the deal

Scot Parkhurst, UK energy sector director at consultancy WSP said the deal was “long overdue”. “Finally we have certainty that this important project will go ahead, safeguarding the specialist skills across the construction sector that have been sitting dormant for too long,” he said.

“Deep-rooted uncertainty in the industry, largely due to the dawdling Energy Market Reforms, have delayed construction to the extent that generating capacity is only just meeting energy demand.

“On top of that, our spare capacity is set to fall to 4% over the next three years so if we see above average winter demand or reduced electricity imports from the EU then there could be no spare capacity at all in 2015 and 2016. It’s a very worrying situation for our energy security.”

Paul Stapleton, head of energy at EC Harris said: “This is great news for the UK construction industry and civil nuclear sector. Programme assurance and a focus on the management of environmental and safety risks will be key to a successful outcome for his landmark project.

“The strike price is just right given the length of the programme and the timing for when the plant will be operational.

“With such a diverse set of consortia and stakeholders, cost and programme certainty are critical since the consortia partners are bearing the commercial risk.”

“This deal therefore marks a major step forward in realising its potential and we hope to see Hinkley being the first of a whole fleet of new nuclear stations, allowing costs to be reduced over the course of the programme, limiting the impact on consumer bills.

“Passage of the Energy Bill still however remains a crucial missing piece of this jigsaw. While the agreement on a strike price lifts the cloud of uncertainty for investors and demonstrates Government’s commitment to the future of nuclear, it is the Energy Bill that will provide the necessary strategic direction required to build investor confidence in the long term.

“We urge prompt progress to secure its passage.”