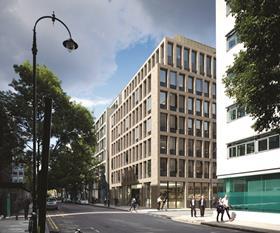 Derwent London plans to undertake its largest ever development programme by committing around £280m to development projects over the next two years, the client announced today.

Derwent London said schemes at 80 Charlotte Street (pictured) and 55-65 North Wharf Road – both of which have planning permission and together represent 620,000 sq ft of development – were among the schemes being considered.

Derwent put the £150m Make-designed redevelopment of 80 Charlotte Street on hold last July after the occupier, Saatchi & Saatchi, part of Publicis Groupe, signed up for space from mid-2014 at under-construction Derwent buildings Turnmill and 40 Chancery Lane, meaning it will occupy at 80 Charlotte Street longer than expected.

Derwent added it was working on proposals to redevelop 9 Prescot Street, 25 and 29 Berners Street and Monmouth House, which together could represent a further 290,000 sq ft of development activity.

The firm announced its development push in a statement accompanying its full-year results to 31 December 2013, which showed a 10% increase in pre-tax profit to £57.8m, up from £52.5m the previous year.