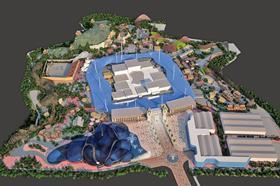 Construction of a £2bn leisure resort in Kent to rival Euro Disneyland is expected to begin in 2016, the developer of the project has said.

The developer of the Paramount Park scheme to transform the derelict Swanscombe Peninsula into a resort this week outlined a proposed timetable for the project as part of the first informal phase of the public consultation.

London Resort Company Holdings (LRCH) said following the consultation and planning process, construction of the proposed resort could get underway in 2016, with the opening in the summer of 2019.

LRCH was launched in 2012 as a joint venture between Development Securities, aggregates firm Lafarge and contractor Brookfield Multiplex, but the parties were bought out by Kuwaiti European Holdings, which now holds a 75% stake in the project, in August 2013.

Project leader Tony Sefton told Kent Online that the developer is “committed to the consultation timetable”.

“Come October, the next stage of exhibitions will be more detailed. Then the fun stuff starts to come out. The key message is ‘it’s coming’. It’s happening now,” he said.

Ray Hole Architects and FaulknerBrowns Architects have undertaken the initial masterplanning and feasibility studies for the development.