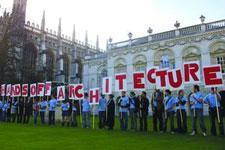 A coalition of UK property developers and housebuilders is set to launch this week to fight proposed Tory planning policies.

The group, to be named Building Futures and to include developer Land Securities and housebuilder Countryside Properties among others, will set out evidence to support its fears that proposed Tory changes to planning policies will hand power to Nimbys at the expense of the construction industry.

The Tory party has pledged to scrap national planning targets and hand power over housing numbers to local councils, whom developers fear are much more influenced by grass-roots anti-development campaigns.

The group said research commissioned by it carried out by Com Res said that the majority - 57% - of local councillors thought that housing targets were too high. Only 14% said they were too low.

Emma Cariaga, head of strategic projects at Land Securities, told The Sunday Times the group wanted to retain a national planning framework. She said: “We want applications to be treated fairly and judged on merit, not on the basis of instincts or political whims. Weakness in the planning system will threaten economic recovery.”