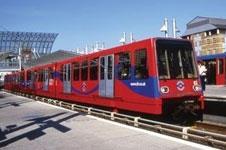 Transport for London has secured funding for an £18.2m upgrade of the Docklands Light Railway to increase capacity by 50% on its Beckton route in time for the 2012 Olympic Games.

TfL said work on the branch, which will serve the ExCeL conference centre and the Olympic park, would begin by the end of the year. Funding will come from three sources – the Olympic Delivery Authority (£10.8m), the London Development Agency and the Homes and Communities Agency (£5.4m).

Ian Brown, TfL’s London rail manager, said the Beckton upgrade would ensure the whole line was able to meet capacity. He said: “We were concerned that the line was the only one where funding was not in place to upgrade to a three-car operation.”

DLR currently operates a two-car service and needs to upgrade the service to meet growing capacity. A 2006 parliamentary select committee on transport drew attention to the danger the overcrowding at Custom House, which serves the ExCeL Centre. It cited an air business and travel newsletter, which had advised visitors to ExCel to use Prince Regent station instead of Custom House.

Taylor Woodrow currently has the contract to extend platforms for three-car trains on the rest of the network. They are also constructing a new station at South Quay, and modifying and strengthening 70 bridges and viaducts.