Domestic heat pumps: So you think this will do the job, then?

Given that the government seems bent on promoting heat pump technology to help it meet its carbon reduction targets, it’s odd that evidence for its effectiveness has been so thin on the ground. Now at last a study reveals the truth… 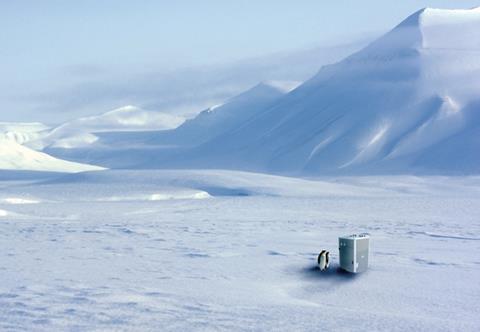 How well do the latest generation of domestic heat pumps perform? This question is becoming urgent as the government looks for ways to meet its 2020 target for 15% of all heating to come from renewable sources, and housebuilders look for ways to comply with the 2010 edition of the Building Regulations and the Code for Sustainable Homes. If we invest in this technology, will it deliver?

Heat pumps are not a renewable technology in the same way that photovoltaics are, but their manufacturers claim they are much more efficient that standard heaters, as they produce between three and five units of energy for every unit used to run them. But there is a lot of scepticism about these figures, with many claiming that air-source heat pumps often generate more carbon than an A-rated gas boiler, especially when used with an old radiator system.

What is certain is that data on how heat pumps perform in real-life is thin on the ground. With this in mind the Energy Saving Trust set out to monitor 83 installations in properties throughout the UK. “In 2008 we decided to do the trial because government grants were being offered to customers for heat pump technologies, but nobody knew how they performed in the real world,” says Jaryn Bradford, renewables development manager for the Energy Saving Trust. The Department of Energy and Climate Change, which supported the project, was also keen to find out what it was getting for its money. A range of systems were monitored. There were 54 ground-source installations - which require a buried loop of pipe or a borehole -and 29 air-source systems; they were placed in a variety of dwellings with a variety of occupancy patterns, including social housing, terraced houses and large five and six-bedroom private properties. Most were retrofits, installed between 2005 and 2006, although the air-source systems tend to date from 2008, when the technology became more widely available and was accredited under the Microgeneration Certification Scheme.

The Energy Saving Trust monitored the systems for 12 months from March 2009. It measured coefficient of performance, which is how many units of heat the pump produces for every unit of electricity used to power it. This is the figure normally quoted by manufacturers and based on the unit’s performance under laboratory conditions; system efficiency was also measured. This paints a more realistic picture of the sort of energy savings the end user sees.

Given that a study like this hadn’t been done before, Bradford says it was difficult to know what to expect. When the results came back, the coefficients ranged from 1.4 to 3.6. To put this into perspective, SAP, the software tool used to show that a house design complies with energy regulations, assumes a notional coefficient of about 2.5 depending on the type of system. “What we found was that 15% of the sample performed very well, but the bottom 15% performed poorly and we found that those heat pumps should probably never have been installed in those situations,” says Bradford.

The figures for system efficiency are more revealing. Again there was a range, this time between 1.2 and 3.2 (see bar chart). In Europe, a level of system efficiency that would allow a heat pump to be considered as a low-carbon technology under the Renewable Energy Directive is about 2.9, although this figure is being regularly revised. This would mean that three-quarters of the installations would not be classified as renewable energy, which is ironic given the incentives offered by the government to exploit its carbon-saving potential. Only four out of the 29 air-source heat pump installations bettered the 2.9 threshold; the ground-source pumps fared only slightly better.

Bradford is keen to accentuate the positive. “Twenty or so of our trial have achieved system efficiencies above best practice which isn’t bad given that these are new installations and it’s a new technology to the UK and installer training isn’t as advanced as it is in Europe.” He adds that others were close to the threshold. “What we would like to do in the second phase is investigate what small steps can be taken on site to try to improve performance and it could be as simple as teaching the customer how to use the controls or a routine service check.”So should we be putting our faith in the technology? Roger Nordman of the SP Technical Research Institute of Sweden, which has undertaken similar studies, says the results show a surprisingly wide variation. Nordman believes this would indicate that it’s an issue with the quality of the installations or the sizing of the units, rather than the technology. “I don’t think it is the products as we have tested the same models in other EU countries and they have been shown to perform.”

It’s worth noting that the installations in the Energy Saving Trust trial were installed before the Microgeneration Certification Scheme came into force. Bradford says:
“We don’t want to make the conclusion that today’s products are better, but what we would want to do in a second phase of the trial is add a couple of new products that have been installed through the scheme and not only look at the data, but survey the installation to see if that has been done better and if practices have changed.” 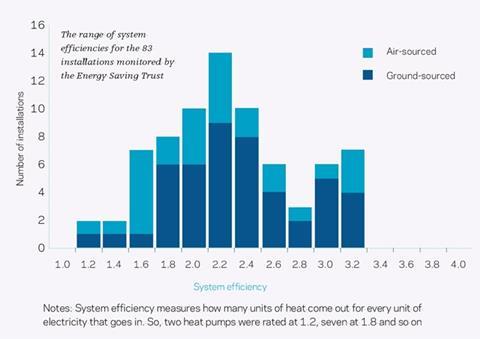 Examples of poor practices uncovered in the study included long pipe runs between heat pump units and properties, and locating hot water storage tanks in uninsulated garages. System sizing was another issue. For ground-source installations it is vital that the length of the ground loop matches the heat pump and that they are both suitable for the size of the property.

Kelly Butler of the British Electrotechnical and Allied Manufacturers Association acknowledges that poor performance can be attributed to design and system commissioning. However, he says that the heat pump industry is addressing these issues through investment in training. He adds that the industry is also engaged in development of a National Skills Academy and says that by 2020, 8,000 installers will be trained in heat pump design and installation, compared with 2,000 at present.

The way occupants programme the heating system is also an area for further study. “When heat pumps start up they are less efficient until they get up to temperature, and if they are cycling being turned on and off], that reduces efficiency too,” says Bradford. Occupants need to be educated about the best regimes for running the space heating and producing hot water.

Also marked for further investigation is the impact that the distribution system, especially the radiators, has on the efficiency of the heat pump. With many customers looking to use them as a replacement for an existing boiler, care is needed when looking at the heat demand of the property and the potential heat output of the radiators (heat pumps operate at lower temperatures than gas boilers, and may need larger radiators).

The Energy Saving Trust is now hoping to run a second year of monitoring to dig deeper into the issues. For the sites that didn’t perform well, it wants to see if simple changes to the systems can improve performance and for the good sites it wants to determine what has made them perform so well, and what that can mean for best practice installation.

If the UK’s first large-scale monitoring project has shown that heat pumps are underperforming, there might be another cloud on the horizon. With the ending of the grants from the Low Carbon Buildings Programme and CERT set to expire in 2012, the cash incentives for installing them are drying up.

Manufacturers and homeowners will be hoping that the proposed Renewable Heat Incentive, which will pay householders who generate heat from renewables, will soon materialise. However, the coalition government has concerns over the scheme’s funding and has yet to make an announcement on its future. Until it does, the long-term prospect remains uncertain.