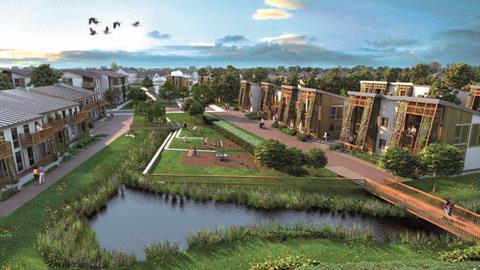 Designs for exemplar Barratt housing project may be watered down despite £7.4m government funding

Environmental standards at a Barratt housing scheme - hailed a flagship for zero carbon homes - are set to be downgraded, despite receiving almost £10m in government subsidy.

The Bristol scheme, known as Hanham Hall (pictured), is for the refurbishment to zero carbon of a listed former hospital alongside the creation of 195 homes on a

5 ha site. It has been designed by architect HTA for Barratt after the housebuilder won a competition run by government regeneration quango the Homes and Communities Agency to build an exemplar zero carbon development.

Despite Barratt and the HCA saying the scheme would be built to level 6 of the Code for Sustainable Homes, designs are being revised, in part to reflect a watering down of the definition of zero carbon announced by the government in the March Budget. This means that in effect all new homes will only have to reach code level 5.

Barratt and the HCA say no final decision has been taken, but Building understands that the specification of the energy values of some of the materials is being reconsidered, and the development is set go ahead without the planned biomass-powered on-site energy centre.

So far the hall has been restored and two show homes built, but none of the sale homes have been constructed as Barratt has been negotiating with the HCA over the specification of the scheme.

A source close to the development said: “These changes are commercially not necessarily a bad thing, because the economics of the energy centre were problematic, but can we really call it zero carbon?”

The scheme, which is built on previously government-owned land, has been supported with £7.4m of government funding, and was in line to receive a further £800k when the energy centre was built.

Richard Gregory, managing director of Barratt Bristol, said: “In the light of the recent changes to the government’s 2016 zero carbon proposals, we are in discussions with the HCA about the most appropriate solution for all stakeholders. We are committed to delivering an exemplar project in line with the government’s ambition.”

David Warburton, HCA head of area, said: “We are working with Barratt to agree the next steps for the project. It has always been our ambition to deliver an exemplar, zero carbon community on that site that local people will be proud to live in. We remain committed to achieving this.”