Interserve, Laing O’Rourke and Morgan Sindall have all reported a drop in construction profits

Results published this week from three of the biggest UK contractors showed the deepening impact of the gloomy economic environment.

On Wednesday Interserve reported a fall of 14.5% in profit from its construction division despite a 10% growth in profit across the whole business, which also includes support services work. Profit in the construction business fell to £20.1m with revenue falling 5.5% to £484.1m in a “challenging” environment.

Interserve blamed the revenue fall on cuts in public spending, saying “signs of an anticipated moderation in public sector spending are reflected in the revenue decline”.

The news followed contractor Laing O’Rourke reporting a halving of full-year pre-tax profit to just £25.9m on revenue of £3.3bn, resulting in a profit margin of just 0.75%.

The number of staff employed by the firm fell by a quarter from 19,668 to 15,027, as the company laid off workers in Europe in light of the falling workload, and beefed up its operations
in Australia.

Turnover was down 6% from the £3.53bn reported in 2010. Chairman and chief executive Ray O’Rourke said the results demonstrated the firm’s resilience despite the “continuing economic turbulence”.

“We continued to steer the company through recession, posting a profitable performance and winning new work in parallel, reflecting progress on all fronts,” he said.

Contractor Morgan Sindall announced its intention to focus on regeneration as it reported half-year results showing pre-tax profit down 9% to £16.7m.

The reduction in profit came despite a rise in turnover of 11% to £1.09bn, partly off the back of the £28m purchase of contracts from defunct social housing business Connaught. 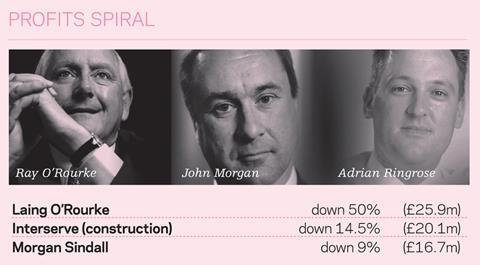