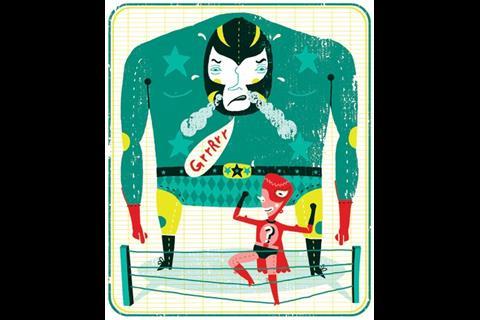 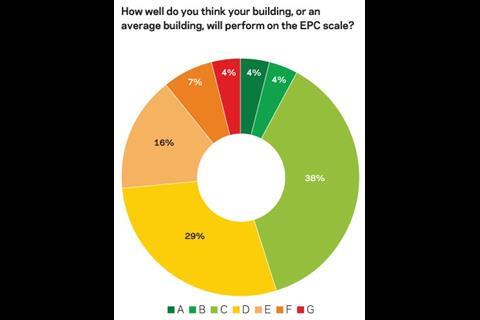 How well do you think your building, or an average building, will perform on the EPC scale? 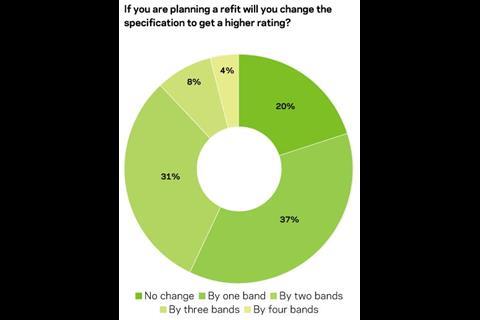 If you are planning a refit will you change the specification to get a higher rating?

If you think that getting a decent energy performance rating will be a pushover, the chances are you may end up feeling bruised by the experience. Thomas Lane analyses Building’s latest survey of building owners

There is much optimism abroad in the land. According to our survey of members of the British Council for Offices (BCO), building owners and occupiers are confident about the energy performance of their stock. This is good news, because since the 6 April they have needed to provide an energy performance certificate if they rent, sell or construct a building. However, it’s less good news in that, for many, that confidence may prove entirely misplaced.

The survey, compiled exclusively for Building, aimed to find out whether the 1,500-strong membership of the BCO intended to get their buildings certificated, whether they had the necessary information to hand and whether they thought there would be enough assessors.

We also asked what effect they thought energy certification would have on property values and how they thought their buildings would perform.

One of the most interesting findings is that, although 67% of those surveyed expect to get either a C or D rating, only 27% anticipate an E, F or G. This suggests that either BCO members inhabit very up-to-date buildings or they’re in for a shock, because a building constructed to 1995 Part L standards – which includes everything built up until 2002 – would get an E.

Brian Scannell, managing director of energy assessment company NES, says: “This reflects what happened with housing. People assumed their home would be in the middle but the average rating is right at the bottom of the D scale. The point was that the scale was designed to encourage improvement. I would be surprised if we had a significant number of C-rated buildings.”

Fortunately, a healthy dose of realism is in evidence elsewhere in the survey. Most respondents see bad ratings as bad news. A majority, 55%, expect poorly performing buildings to be worth less. Only 13% expect the value of good buildings to go up without affecting the value of the bad ones.

It seems that this is spurring respondents to action, which was the point of EPCs, after all. Although 58% say they will make minor changes to the way they manage their portfolios, a respectable 68% say they will increase the specification of a refit to improve performance by one or two bands.

The point is the scale is designed to encourage improvement. I would be surprised if we were going to have any significant number of C-rated buildings.

Getting employees to reduce energy use was the most popular option – nearly half say they have already taken steps and 36% say they are “highly likely” to do so. Adjusting thermostats to reduce energy use is less popular, with only 12% having already done so. If display energy certificates are brought in for a wider range of buildings it will be interesting to see how these figures change.

There is a 50/50 split between those who plan to get their entire portfolio certified in one go and those who will get the assessors in only when buildings become vacant. However BCO members think there will be problems when they do want their buildings certificated as 70% reckon there won’t be enough assessors qualified to do the work.

And when respondents do find an assessor they could find a survey expensive because 95% have some air-conditioned buildings in their portfolios, which means it will take longer and cost more.

Fortunately, many BCO members have the necessary data at their fingertips, which should give the assessor less running around to do. For example, 91% have floor plans available and about half have data for chiller performance and lighting.

The general impression, then, is that EPCs are working. BCO members, at least, see certification as a key issue: 78% think energy performance ratings will be used as a basis for increasing property taxes in the future, so if they don’t do it voluntarily the government may make them do it later. Which is a pretty good argument for getting on with it now …

Nick Cullen, a partner at consulting engineer Hoare Lea and member of the BCO’s environmental sustainability group, will present the findings of the survey at the Think 08 sustainability conference and exhibition, which is being held at the Excel Centre in London on 7 and 8 May. The BCO session is on 7 May at 11.45am.

Who took part in the poll