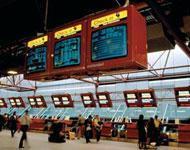 Authorities were able to evacuate the area and nobody was injured.

The Spanish infrastructure group, which owns Heathrow and Gatwick airports, was targeted because it is building part of a high-speed train link through the Basque Country that joins Spain and France. Eta sees the link as an imposition on the region by the Spanish and French governments.

In December, Eta shot dead Ignacio Uría, the owner of a construction company working on the rail link.