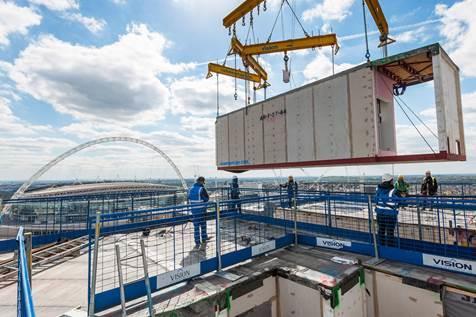 The last piece of Europe’s tallest modular tower was lowered into place this week in north London.

The 29-storey structure is a student accommodation scheme developed by Tide Construction and Vision Modular Systems.

The development, Apex House in Wembley, is made up of 679 modules and will deliver more than 580 rooms ready for students to move into in September. It is the pair’s fourth modular project in the area, and will include communal facilities, such as a cinema, and an outdoor courtyard.

The project is being funded by GCP Student Living, a closed-ended fund, which is listed on the London Stock Exchange and already owns a number of other completed developments, primarily in and around London.

The total build time was 12 months, with the modules being stacked up in just 13 weeks to the height of 90 metres. Apex House will be managed by Scape, a student housing operator, and was designed by architects HTA Design.

Christy Hayes, Tide Construction’s chief executive, said: “Modular construction provides a much faster alternative to traditional construction without compromising on the quality of the building, or the versatility of the design.