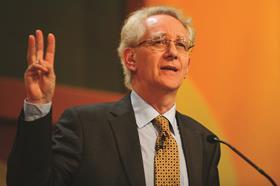 Stunell, who was a minister in Pickles’ department until 2012, told Building the consultation published earlier this month was “really sad”. The change would exempt large numbers of public buildings from displaying information about the energy they consume.

DECs are supported by green lobby groups and the mainstream property industry through the British Property Federation and the RIBA as a way of encouraging property owners to undertake energy efficiency measures. Both groups are campaigning to have their use extended to commercial buildings.

Currently the UK government goes beyond the minimum requirements of the EU Energy Performance of Buildings Directive by requiring all public buildings to display DECs, irrespective of whether or not they are “frequently visited by the public”, which is the exact wording of the EU regulations.

Stunell said: “I think it is a backward step. When I was a minister, I spent a lot of my time trying to avoid CLG [Department for Communities and Local Government] abolishing them [DECs] entirely. It’s really sad that we’re now reducing them to the least we can get away with under EU law, rather than deciding to be a leader in this field.

“Going to the absolute minimalist interpretation is the wrong way to be going,” he said.

The UKGBC has already said the proposals “beggar belief” given the potential savings to be made from reducing the energy demand from public buildings. John Alker, UKGBC acting chief executive, said: “Rather than rowing back on DECs, government needs to ensure they are better enforced, with a view to extending them beyond public buildings.”

The concerns over the consultation come as Building’s top 50 young sustainability talents for 2015 criticised the government’s performance on sustainability policy, awarding the coalition an average of just over four out of 10 for its track record.