Labour leader sets out his forthright views on HS2 and blacklisting 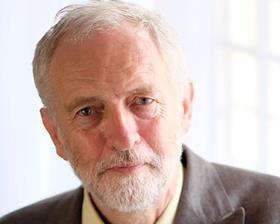 Jeremy Corbyn has said his backing of the £46bn HS2 project is conditional on getting “guarantees” it would not divert money from other rail projects.

In an exclusive interview with Building, conducted in his North Islington constituency last Friday, the Labour leader also confirmed he wants his party to lead a “big debate” on whether the line should terminate west of central London at Old Oak Common, rather than at the proposed terminus of Euston station, where he warns of “enormous” disruption.

He outlined several other rail investment priorities: “Rail infrastructure in the north, particularly the east-west rail link from Manchester to Newcastle and Midland Mainline, and railways north of the central belt in Scotland because we have a very serious imbalance. Likewise railways in the South-west beyond Exeter - the Devon and Cornwall lines are very slow and they need a lot of upgrading.”

Outlining his concerns at HS2’s Euston plans, he said: “The disruption is enormous. There is a problem with the capacity of the Victoria line to cope with that number of passengers all being pushed down on to those platforms.

“The Victoria line, like the Picadilly line, already has a problem of too narrow platforms and despite it running 39 trains an hour - which is amazing - but it can’t go beyond that, you physically could not go more than that number of trains per hour so you’re at capacity level there already.

“So I think there’s a bit of a discussion going to go on about whether you use Old Oak Common [as a terminus] or not.”

Corbyn noted that the House of Lords’ Economic Affairs Committee report on HS2 in March recommended that the government should reassess whether to terminate HS2 at Old Oak Common.

He conceded: “It’s likely HS2 will be underway by the time we go into government in 2020”.

Corbyn also said shadow home secretary Andy Burnham’s call for a public inquiry into the construction blacklisting scandal had his “absolute approval and support”, as he described the practice as “absolutely outrageous” and an “abomination”.

Corbyn said he “absolutely” would use his position as leader to raise the profile of the issue, adding: “Blacklisting is an abomination. It’s out with the European Convention of Human Rights. It’s a denial of the human rights of the individual. The idea that groups of workers - in this case often building workers, but not exclusively - should be prevented ever for working again is absolutely outrageous.”

When asked if he backed the Scottish Affairs Committee’s recommendation that contractors that blacklisted, or did not make proper reparations for past blacklisting, should be denied public contracts, he replied: “I think if you’re doing business with the private sector you’ve got to be very clear that the public procurement can produce a public good in the sense that you can do business with companies that do train people, do have apprenticeships, do pay the living wage.

“That happens already with TfL, it happens with many local authorities, and exactly the same should apply to an open employment charter. But you don’t use secret evidence against people who’ve actually done nothing wrong other than hold political views. We live in a democracy.”