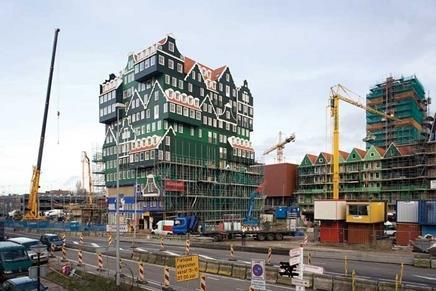 This is the 160-bedroom Inntel hotel designed by WAM’s Architecten. The £13m, 12-storey Inntel hotel in the Dutch town of Zaandam near Amsterdam has a floor area of 7,500m². It was inspired by the famous green wooden houses of the region. The scheme is is nearing completion.

This scheme fights back against a Travel-Inn culture of monotony. It boasts a bespoke experience for all, and what an experience it is. WAM is the so called champion of “fusion architecture”, buildings that are at once traditional and new. This domestic mega-structure is a mutant of dozens of traditional Zaandam houses, combined to create something fresh, and, some might say, slightly crazy.

However, those tempted to dismiss WAM as a maverick should pause for thought. Despite its exterior of blinding green kitsch, the hotel is expertly planned and thoughtfully designed. Its proportions are well balanced, and its aesthetic rich and interesting. Some might call this post-modernism, others, a monster. I call it genius.

The building has an unusual facade where the form has clearly been inspired by the context it is situated in. The right hand side of the building is more structured and has a more uniformed appearance, whereas the left hand tower appears more unsystematic.

The height of the tower may act as a beacon drawing people to the hotel and the differing depths of planes could create interesting plays of light in the lower floors, as well as potentially different footprints to each of the rooms. The curious appearance of the building will attract divergent opinions, but this makes for a unique hotel rather than the usual modular constructions.

Jo Parsons is studying architecture at Nottingham Trent University.
Do you want to be a judge on First Impressions? Then email nargess.shahmanesh@ubm.com.
For the latest construction jobs and career tips visit Building4Jobs.