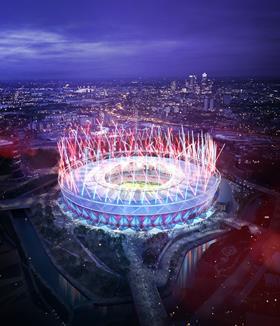 London Olympic stadium builder Sir Robert McAlpine is vying against four other shortlisted contractors including Balfour Beatty for the job of converting the venue into the home of West Ham football club.

Sir Robert McAlpine is also up against ISG, Buckingham Group and Shepherd Construction for the main shell-and-core contract, which according to construction database Barbour ABI is worth £100m.

The main contractor role was first advertised last December with a winner to be chosen by the end of this year.

Mace has already been appointed as project and programme manager for the work while Buro Happold is structural engineer and the architect is Populous. All three firms worked on the original stadium build, in the case of Mace through its role at Olympic delivery partner CLM.

The plan now is to turn the stadium into a 54,000 capacity “multi-purpose and multi-function venue” capable of hosting a range of events, some of which are due to take place before West Ham’s move to Stratford in time for the 2016-17 football season.

Executive director of infrastructure at client the London Legacy Development Corporation (LLDC), Colin Naish, told Building two other major packages of work are also being procured – the contract to reconfigure the roof advertised last week  - though to be worth around £40m - and the M&E contract, which will be advertised shortly.

Naish said these contracts would be awarded in the next two to three months with the firms later novated to the tier one contractor once appointed.

A third package of work will involve appointing a contractor to build a prototype for the retractable and relocatable seating, which will enable football fans to sit above the existing running track and close to the field of play.

Naish said both the seating and roof elements of the job would be technically complex.

Of the roof, he said: “It will extend out so the water-drip line covers the seat closest to the field of play. The existing roof doesn’t do that so we will be taking that down and replacing it with one around double the size.

“There is some [roof] stregthening to be done. It’s a mix of steel and cable and the outer edge of the roof will be transparent to bring daylight down to the field of play and athletics track.”

The overall value of the legacy work is estimated to be between £150m and £190m in total, but LLDC chief executive Denis Hone said the exact figure was not being divulged in order to keep firms in dark as to what pot was available and therefore get the best possible deal. “What I don’t want to do…is disclose the budget when we are in the middle of choosing contractors,” he said. “Throughout the Olympics this is what we did.”

West Ham was officially unveiled as the ‘anchor’ tenant for the stadium last Friday following the conclusion of a tortuous financial negotiation between the club and the LLDC.