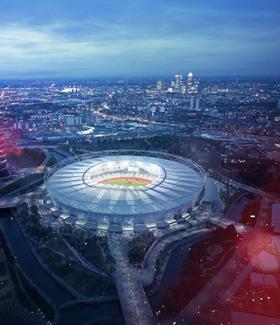 Plans to transform London’s former Olympic Stadium for its post-games use were given a green light at a planning meeting in Stratford last night.

The scheme, drawn up by the stadium’s original architect Populous, involves introducing retractable seating in the lower tier and a new extended roof design to cover the new seating, as well as the re-use of the well-known lighting towers.

The project will reduce the stadium’s seating capacity from the 80,000 it boasted during the Games to 60,000, though for concert events non-seating capacity will mean that up to 80,000 can still attend.

The multi-purpose venue, which has Premier League club West Ham United confirmed as an anchor tenant, will host Rugby World Cup matches in 2015 and the 2017 World Athletics Championships.

The London Legacy Development Corporation’s planning decisions committee unanimously granted permission for the application, which was made by the LLDC on behalf of E20 Stadium LLP – a special purpose vehicle comprising the organisation and Newham Council.

The plans will now be assessed by mayor of London Boris Johnson.

Dennis Hone, LLDC chief executive, said: “This is an important milestone that paves the way for the Stadium’s intended legacy use as an all-year-round venue.

“As we prepare for the phased re-opening of Queen Elizabeth Olympic Park this summer, with the long-term future of all eight permanent venues on the Park now secure, we remain firmly on track to deliver a meaningful physical and social legacy for Londoners.”

Sir Robin Wales, Mayor of Newham, said: “This is fantastic news and we will work hard to make sure our residents have access to the jobs created by the construction project as well the stadium itself once it opens.”

As Building revealed in March, London Olympic stadium builder Sir Robert McAlpine is competing against four other shortlisted contractors including for the main contractor role, estimated to be worth £100m according to construction database Barbour ABI.

The other firms in the running are Balfour Beatty, ISG, Buckingham Group and Shepherd Construction.