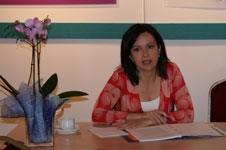 Housing minister will strive for 240,000 units a year when market recovers but refuses to commit to 3m homes by 2020

Caroline Flint says the government is still striving to build 240,000 homes a year in England despite the sharp fall in housing starts in 2008.

The housing minister said she was looking at how the government could speed the delivery of new homes when the current housing slump ends.

She said: “Given the downfall we need to see what mechanisms we have at our disposal now to start building up towards the 240,000 homes.”

“When the market picks up again, we have to be up and running.”

The minister refused to say whether the government was still aiming to build 3,000,000 new homes by 2020. Instead she reiterated the 240,000 homes a year target.

The Construction Products Association yesterday predicted that housing starts in 2008 for the UK, not just England, would be 148,000 in 2008.

Caroline Flint refusing to commit to 3m homes by 2016