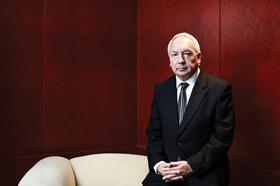 The government has announced five new members of the Construction Leadership Council - responding to industry criticism of the recast body by widening its representation from tier one contractors to suppliers, architects, consultants and housebuilders.

The first meeting of the newly-formed Construction Leadership Council (CLC) is scheduled for next month.

In July the government announced it was relaunching the CLC, which was downsized from 30 members to just 12. The government also announced it will not renew the role of chief construction adviser - currently held by Peter Hansford - whose tenure ends in November.

Announcing some of the new CLC members, Hansford said the government “very much supports this streamlining” of the council.

He added: “We started with some 31 members, and this was important in 2013. But as anyone who has chaired a group of over 30 members will know, large groups do not make for the most effective action.”

Answering a question on the lack of materials representation on the CLC, Hansford said it’s the CLC members’ responsibility to get the whole industry involved.

He said: “What I presented was the leads of the six workstreams. It’s for the work stream leads to gather the people around them to make it happen.

“This is an opportunity for more people to be involved, not less.”

Welcoming the new members, skills minister and CLC co-chair Nick Boles said: “The renewed Construction Leadership Council will provide more business-focused change for the industry, and I’m pleased to be joined by some of its leading figures.

“From small but ambitious firm Morrisroe to major housebuilder Crest Nicholson and international architects BDP, the new Council brings together the expertise we need to help UK Construction build on recent growth as the foundation for future success.”