Work to commence on the third phase of Ballymore’s Snowhill 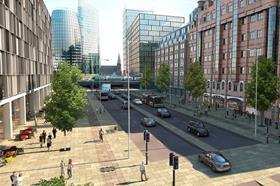 The 420,000 sq ft speculative office development in the city centre is the third and final phase of Ballymore’s 96,000m2 development. It sits within Birmingham’s 20-year Snowhill masterplan, which aims to create a Canary Wharf style commercial district.

Bam was appointed as preferred contractor on the project last summer. It had been expected to start on site last September and complete in the first quarter of 2018, but completion is now expected at the end of 2018.

The deal follows M&G Real Estate’s acquisition of Two Snowhill in 2014 and Bam’s appointment as preferred contractor on the project last summer.

Chancellor of the Exchequer, George Osborne, said the deal would play an important part in promoting growth in the Midlands and create “hundreds of important construction jobs in Birmingham”.

He added that this demand is “set to rise further with planned infrastructure improvements such as HS2’s Phase One confirmed to start in 2017”.

Ballymore’s Chief Executive, Sean Mulryan, said the firm was delighted to start on the third and final phase of the Snowhill scheme.