Developer behind both deals is Mace 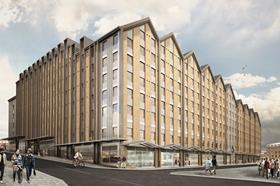 Galliford Try will carry out work on the firm’s 644-bed scheme in the Welsh capital. It will be built on the former West Wing of the city’s Royal Infirmary in the Adamsdown area of Cardiff.

The 10-storey development will incorporate a mixture of apartments, studio-style living and cluster accommodation.

There will also be an on-site media room, gym and yoga studio, private dining, study areas and a private courtyard. Two retail units will front onto Glossop Road.

And in Exeter, Mace has appointed Sir Robert McAlpine to deliver a mixed-use scheme (pictured) of 599 student beds and approximately 20,000 sq ft of retail space.

The project is on Belgrave Road in the city centre and is next door to one of the city council’s future development sites, which is earmarked for a major leisure-led mixed-use scheme.

Both sites are expected to be finished in time for students to move in for the beginning of the 2019/20 academic year.