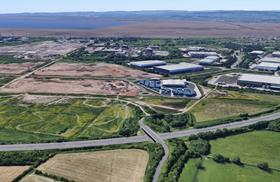 Galliford Try has won a contract worth more than £24m from Highways England to build a new junction on the M49 at Avonmouth near Bristol.

It will feature a new grade separated junction with a roundabout spanning the motorway that will incorporate a new and existing bridge (pictured) along with access and slip roads on both sides of the junction.

The contractor said the project will reduce delays and congestion in the surrounding roads and improve access to the port of Avonmouth and the Avonmouth Severnside Enterprise Area to the west of Bristol.

Design starts immediately. Construction is expected to start in June with completion set for October 2019.

Galliford Try has also won a £9m contract from Derby City Council to carry out the A52 Wyvern Transport Improvements scheme in the city.

It will widen a stretch of the A52 Brian Clough Way and adjacent Wyvern Way to three- and two-lane carriageways respectively.

Other elements include a new pedestrian footbridge and signalling of three junctions, which the firm said will help reduce congestion in the Pride Park area.

Work starts immediately with a completion date of February 2019.