The Garden Bridge has been labelled a "failure for charity" as the regulator charged with overseeing not-for-profit organisations says policy makers should in the future be careful about setting up a charity for delivering a public project.

The Charity Commission has published a report on the Garden Bridge Trust, in which it said its approach to transparency and accountability was not up to scratch. 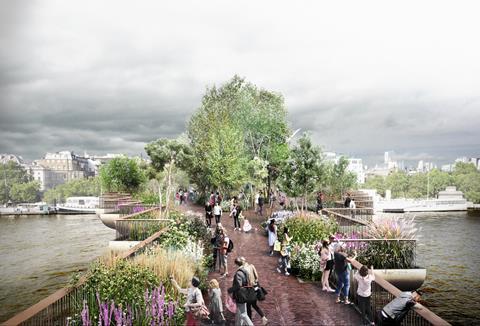 The report said that over £50m of public funds were spent by a charity without producing demonstrable public benefit and concluded that this represents “a failure for charity” which risks undermining public trust.

Baroness Stowell, chair of the Charity Commission, said: "I am clear that this represents a failure for charity that risks undermining public confidence in charities generally."

The scheme, designed by Heatherwick Studio, was pulled in 2017.

In February, it was revealed Arup was handed more than £12m for its work on the job.

And the Bouygues team that was supposed to build the Garden Bridge ended up being paid £21m for a crossing which never happened.