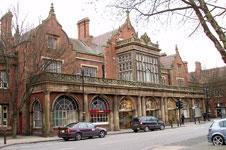 The firm was chosen for the £230m contract from a shortlist of three, by the North Staffordshire Regeneration Partnership (NSRP) and its partners Stoke-on-Trent city council and Advantage West Midlands.

The announcement will be made today at Mipim. The Genr8 proposals are for a phased development, to create about 1.2 million ft2 of office, retail and hotel space. It is hoped that the development will create more than 4,200 jobs, and boost the North Staffordshire economy by nearly £19m a year.

Mick Laverty, chief executive of Advantage West Midlands, said: “One of our key roles as a regional development agency is to ensure that major physical developments are kept moving during the economic downturn.

“We have committed considerable investment to reach this milestone and we are excited by the ambitious plans that have been proposed by Genr8.”

The development will be built in phases over the period 2010 to 2017, with construction work on the first phase expected to begin by the end of 2010.