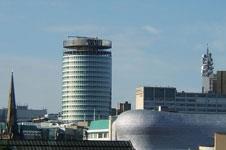 Glenn Howells Architects has won the competition to design a £20m masterplan and buildings for Newman University College in Birmingham.

It is understood Howells beat practices including Edward Cullinan and BDP to the scheme, which will involve the construction of a library, new entrance, family research centre and creche for the Midlands university.

Helen Newman, a director at Glenn Howells, said that the interview process had been unusually rigorous, with the clients asking to visit previously completed buildings.

She said: “You don’t usually have clients wanting to go and see buildings, so it’s very nice to have someone who wants to see what you’re like and what you’ve done. They really know what they want, and they want to get started as quickly as possible.”

A planning application will be entered early next year, with construction starting later in 2009.