New report predicts worldwide output to rocket by 70% through to 2025 driven by growth in China, India and the US 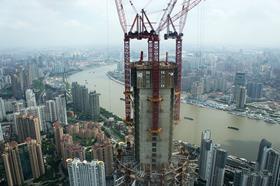 Global construction output will rocket by 70% through to 2025 thanks largely to the economies of China, India and the United States, a new report predicts.

Global Construction 2025, the third in a series of major studies of the worldwide industry published by Global Construction Perspectives and Oxford Economics, looked at the prospects of 46 countries and found that, overall, the world’s construction output will grow from $8.7 trillion in 2012 to $15 trillion by 2025.

While much of the fastest growth will be found in developing countries such as China, India, Nigeria and Indonesia, some developed nations such as the UK and particularly the United States and Canada are also predicted to perform well.

The report says that over the period 60% of all global construction growth will come from just three countries – China, India and the US.

As for the US, the report forecasts that a rapidly growing population and need for housing and new infrastructure will see the volume of construction output there grow by over 75% between 2012 and 2025, cementing its position as the second largest construction market in the world.

Similar factors in the UK – combined with the willingness of Middle Eastern and Chinese firms to invest – will also result in construction growth here outstripping the slow pace found in the rest of Western Europe, the report says.

“Despite near-term weakness, the UK stands out from the rest of Western Europe as a growth market,” it states.

“We forecast that construction volumes in the UK will grow at more than double the average rate in Western Europe to 2025 and the size of the UK construction market will rival Germany’s by 2025.”

However the greatest opportunities may well be found in countries such as Nigeria – set to grow by 8% per year over the period, and the “new Asian tigers” such as Vietnam, the Philippines and Indonesia, the report argues.

Of Indonesia, the world’s fourth most populous nation, the report calls it “perhaps the most dynamic” of this group with construction growth of more than 6% a year to become the world’s fifth-largest construction market in 2025.

“Indonesia will become the world’s third largest housing market globally by number of new homes that it needs to build each year, slightly more than the average number for the US,” the report notes.