Westminster council approves scheme that will increase ground’s capacity to 29,500 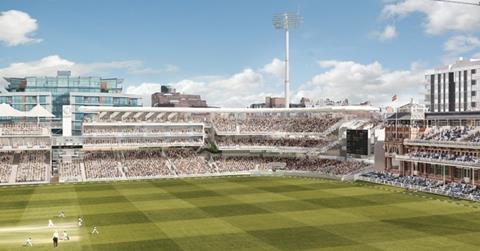 The Marylebone Cricket Club has won planning permission to expand Lord’s cricket ground with a new stand, offices, a banqueting suite, and a pub.

Westminster City Council approved the development on Tuesday, which will increase the ground’s capacity by 5,200 seats to 29,500.

Known as the ‘South-Western Project’, it comprises phase two of the Lord’s Populous-designed masteplan. The earliest that work will begin on the project will be autumn 2019, due to the need for Lord’s to be free of building works that summer for the ICC Cricket World Cup.

Work on phase one of the masterplan, the redevelopment of the Warner Stand, began in September this year and is being delivered by Bam, with the new stand to be completed by the 2017 season.

The key components of the second phase are: