Four schemes will start within the next 18 months 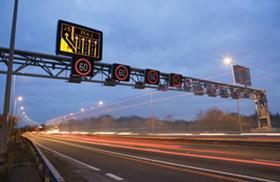 The government has announced that four new smart motorway schemes, worth around £500m, are expected to start construction work within the next 18 months.

Costain will begin work on one project – a nine-mile stretch of the M62 linking the M6 near Warrington to the M60 near Eccles – later this summer.

“We’ll be starting work on four new smart motorways in the North West over the next 18 months and will do everything we can to keep disruption to a minimum, including only closing parts of the motorway overnight when traffic levels are much lower.”

Other schemes taking place in the North West include a 20-mile on the M6 in Cheshire where construction work is due to be completed by spring 2019, providing 40 miles of extra lanes for drivers.

Finally, a new 19-mile smart motorway will be created over the Pennines on the M62 between Rochdale and Brighouse.

Jonathan Stone, a partner at law firm Mayer Brown, said the investment in road building was welcome since it was seen as less risky than other sectors which the government has invested in over the last decade, such as waste to energy facilities, and which had proved “catastrophic for many contractors”.

But he added: “The recent investment should be met with caution, however, as all the indications are that the purse strings will remain tightly controlled. If that is the case, then the level of disputes within the industry is likely to remain high.

“The most effective way of parties to avoid or resolve disputes at an early stage is when they agree to put their differences aside in order to concentrate on the next project together, to their mutual benefit.

“With government spending expected to stay low, those opportunities will be few and far between, leaving litigation as often the only route to balance the books.”