The government is extending its furlough scheme until the end of October, the chancellor has said.

Rishi Sunak made the announcement in the House of Commons earlier this afternoon and in a series of tweets said the initiative, which sees the government pay 80% of people’s wages up to £2,500 a month, said the scheme would have been up and running for eight months by that point. 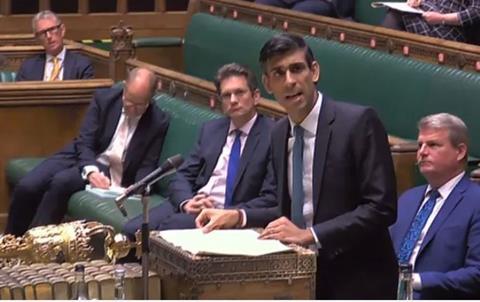 The scheme, which Sunak said is helping pay the salaries of 7.5 million workers, up from 6.3 million last week, was originally due to have finished at the end of this month and was later extended until 30 June.

But Sunak said: “Until the end of July, there will be no changes to the scheme whatsoever.

“From August to October the scheme will continue, for all sectors and regions of the UK, but with greater flexibility to support the transition back to work.

“Employers currently using the scheme will be able to bring furloughed employees back part-time. We will ask employers to start sharing, with the government, the costs of paying people’s salaries.”

He promised further details by the end of May but added: “I want to assure people one thing won’t change. Workers will, through the combined efforts of government and employers, continue to receive the same level of support as they do now, at 80% of their salary, up to £2,500.”

The move has been welcomed by business groups who had been concerned that ending it next month would lead to a wave of redundancies.

Edwin Morgan, director of policy at the Institute of Directors, said: “A furlough extension will bring significant relief to employers and workers across the country. Many firms will be operating far below normal capacity for the foreseeable future. A part-time furlough provides a much-needed launch ramp so businesses can start to get back up to speed.”

This morning, the Construction Leadership Council revealed more than eight out of 10 firms in the industry are using it and said getting rid of it completely on 30 June will trigger thousands of redundancies across the sector.

Speaking before the news, it warned: “The true value of the scheme to both the industry and the country has been that it has prevented large scale redundancies that would have occurred but for the assistance provided by the government. Should this end too soon then a wave of redundancies will rock the industry.”

According to the CLC, 84% of the industry has furloughed workers with contractors typically furloughing more than 60% of staff with SMEs furloughing between 90% and 100% of staff.

Consultants have fared better furloughing less than 20% of employees, although SMEs have had to furlough over 70%.

But the CLC survey found that suppliers and merchants have been the hardest hit with this sector typically furloughing more than 90% of staff.

The survey also said 48% of respondents had furloughed more than 50% of their staff for several months.

The chief executive of the Resolution Foundation thinktank, Torsten Bell, said the government hadn’t ruled out extending the scheme beyond October for those sectors hardest hit by the covid-19 pandemic.

Government spending watchdog the Office for Budget Responsibility has estimated it will cost the public purse £42bn over three months to help 8.3 million people until the end of June. The Resolution Foundation has said it could cost an extra £12bn for each additional month the scheme is extended.