Government spells out workers' rights under a 'No Deal' Brexit

Staff working for a collapsed business will still be protected under existing legislation, ministers say 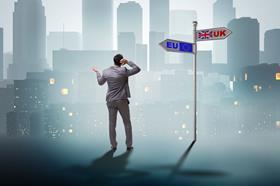 The government has outlined details of protections for workers’ rights in the event the UK leaves the EU next year without a deal being agreed with Brussels.

In a ‘no deal’ scenario, if a UK company or an EU employer were to go bust staff working for those firms would still be protected under existing legislation.

The government said employees would still be able to bring forward claims in the same way, while UK law provided protection for all UK, EU, and non-EU employees working in the UK, “provided that certain other criteria are met”. Leaving the EU would not change this, ministers said.

Existing European Workers’ Councils –  effectively consulation bodies for employees –  would be permitted to continue in operation and requests made before 29 March next year to create such councils would be honoured.

But the government said that UK regulations would be amended so that no new requests to set up a European Works Council or Information and Consultation procedure can be made.

A series of sector-specific ‘No Deal’ impact papers have been published by the government, but as yet no guidance has been issued on what UK construction should do in the event the UK and Brussels do not reach an agreement.