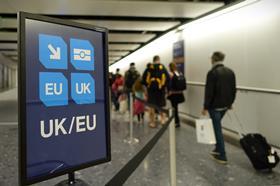 The government has promised construction firms that EU workers will be able to come to the UK following a no-deal Brexit – but said it is still consulting on permanent changes to the border regime after a transition period ends in 2021.

In December the Home Office published a white paper for a new immigration system which will come into force in January 2021, saying it would see the end of quotas for work visas and introduce a new temporary work visa.

Last month immigration minister Caroline Nokes met with the Construction Leadership Council, who told her to consider reducing the salary threshold from £30,000 to £24,000 for tier 2 visas and make the proposed temporary visa last for 24 months instead of just one year.

Nokes told Building that contractors will still have access to EU labour, even if the UK left the EU without a deal at the end of October – the new departure date outgoing prime minister Theresa May agreed with the EU in the spring.

She said: “Government is still working towards a deal [that can be passed in Parliament] and that absolutely would be the best outcome we could get from our discussions with the EU and from Parliament.

“[But] there is not going to be a cliff edge [for the availability of EU labour] – it’s not like the borders are suddenly going to be shut on the night of the 31 October in the event of a no deal.”

Nokes added: “We have to make sure there is still a flow of people and goods and part of that will be putting in transition and temporary arrangements so people can still come here and fill those essential roles.”

The minister declined to comment on whether the government was moving towards the CLC’s suggestions for a permanent immigration regime, saying: “We always said when we launched the white paper in December of last year that we would spend this year listening to those arguments.”

Nokes played down hopes that construction labourers could be added to the Shortage Occupation List – which gives would-be economic migrants preferential treatment if they are applying to work in a profession the UK has a shortage of.

“I think it’s important to stress that we cannot rely on immigration as the only route to solving our workforce needs,” she said.

“The conversations I have had with [contractors have] really focussed on apprenticeships and what they can do to attract young people in the UK into construction.”

Last week, the Migration Advisory Committee, set up in 2007 to offer independent advice to the government on immigration policy, said there was a case for adding professions such as civil engineers and M&E engineers to its so-called Shortage Occupation List ahead of Brexit.

This will see roles on this list bypass a series of criteria that will be required in other professions such as meeting salary thresholds.

But Reynolds said: “It is unfortunate that they have not yet decided to add construction managers, project managers and quantity surveyors to the shortage list despite our representations.”

He added: “We will be seeking a further meeting with the Migration Advisory Council to ensure they fully understand the issues we face and so that we can work towards a solution to our challenges.”