The director overseeing main contractor Rydon’s work on the Grenfell Tower refurbishment has admitted to being “haunted” by the lack of scrutiny the ill-fated project’s cladding and window designs were subjected to.

Stephen Blake, who was Rydon’s refurbishment director on the project – and who also filled in as contracts manager in its final months – said that in hindsight key elements of the tower block’s refurbishment had been presumed to be correct when they were not. 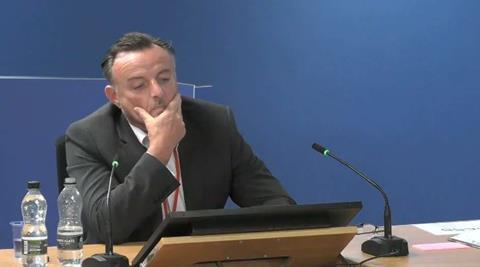 Blake’s comment came at the end of his second and final day of evidence at the inquiry into 2017’s disaster in which 72 lives were lost.

The Grenfell Inquiry’s first phase report concluded that the aluminium composite material (ACM) cladding added to the tower in the refurbishment, a rooftop decorative crown made of ACM and the replacement windows installed at the block had played a major part in the spread of fire.

Asked what he would have done differently, looking back on the project, an emotional Blake (pictured) replied: “Hindsight is a gift that none of us have. In the examination, it’s very clear that at a point in time, when I believed the presentation and the acceptance of the windows and the cladding designs had been accepted to the satisfaction of the … through the design process and the submission and the exchange of building control … I believed this to be correct and it haunts me that it was never … that it wasn’t challenged because it was believed to be correct.”

Earlier on Wednesday, Blake had been clear that he believed it had been original project architect Studio E’s responsibility to arrange – and pay for – any specialist fire safety advice required, even after Rydon was appointed main contractor on the project and Studio E novated to it.

Inquiry barrister Richard Millett QC asked Blake whether it was normal for a principal contractor to proceed through the construction phase of a project like Grenfell without seeking specialist fire safety advice from a fire safety engineer. Blake said he expected such issues to be “flowed through the architectural development”.

Fire specialist Exova was hired by Grenfell Tower refurbishment client the Kensington & Chelsea Tenant Management Organisation and produced an outline fire safety strategy for the refurbishment in 2013 – however the firm was not novated once Rydon was appointed in 2014. Hearings earlier in the year established that the fire safety strategy document was not kept up to date.

Blake told the inquiry that, in his experience, a fire safety consultant was generally employed before Rydon’s involvement in a project and was used to inform the strategy, layout and means of escape put on the tender drawings.

Blake confirmed that he had no experience of working on a project with a novated architect but said he had been “very happy” that KCTMO wanted to keep Studio E on the project.

“I didn’t see that that situation was any different to a non-novated architect,” he said. “It’s employment of a schedule of services.”

Wednesday’s inquiry session also heard that although there had been discussions between Rydon and Studio E about the practice’s terms of engagement on the project as early as April 2014, there had been no formal agreement until February 2016.

Barrister Millett asked Blake whether he considered it was a risk for Rydon to have design-and-build responsibility for the contract but no architect sub-contract in place for the period and be essentially “on the hook” for everything Studio E had done to date. Blake answered: “Potentially”.

Blake was asked whether he had any concerns Studio E had not understood what it was signing up to when the deed of appointment was finalised in early 2016. He said that he knew there was a “debate” between Studio E and Rydon’s legal team on some of the points of the schedule of services but that they had been technical points that were resolved.

Millett said Studio E project lead Bruce Sounes had told the inquiry the practice’s agreement to the terms of engagement had eventually been obtained “under duress”.

Blake was asked whether he had ever told Studio E that Rydon was not prepared to pay the firm’s outstanding invoices unless they agreed to sign the deed of appointment.

On Tuesday, the inquiry heard that Rydon had scored the highest of any bidders for the Grenfell refurbishment contract in terms of the quality of the CVs of key project staff, beating final-stage rivals Durkan and Mulalley. But Millett said Rydon had ramped up details on at least one of the profiles.

The barrister said the CVs, which were a bid requirement, were rated as part of the tender-evaluation process – particularly the CV of the individual responsible for the co-ordination of the design, who was Simon O’Connor.

He said O’Connor’s CV had several inaccuracies – acknowledged by the former project manager last week – that made it a “thoroughly misleading document”. Blake agreed with the analysis.

Millett pointed out that among the incorrect details was a claim on O’Connor’s CV that he had an HNC Building Studies qualification and would be responsible for co-ordinating design work on the project.

Blake said the CVs submitted with the bid had been compiled by Rydon’s business development team.