Win is practice’s second this year in Australian city

Zaha Hadid Architects (ZHA) has won its second major scheme in Melbourne with a 21-storey residential tower on the site of a former police HQ – after the developer ditched a previous proposal by a local practice saying it wasn’t good enough.

Called the Mayfair, the new tower at 412 St Kilda Road – a 15 minute walk from the Royal Botanic Gardens – will include 158 apartments, a restaurant and a café on the ground floor as well as communal space on the roof.

The design replaces a scheme by ARM Architecture, which was approved by the City of Port Phillip in March.

But, according to a planning report drawn up by Australian firm SJB Planning, developer UEM Sunrise “believed that the site [was] worthy of a higher standard of design excellence, than achieved in the existing permit”.

An international design competition was held with Hadid triumphing in a team with local practice Elenberg Fraser.

Hadid practice director Patrik Schumacher, who hit the headlines recently with comments about social housing in London, said the scheme “will help to solidify St Kilda Road’s identity as one of Melbourne’s grandest boulevards, increasing the prestige of the address and the surrounding neighbourhood with a sophisticated development”. 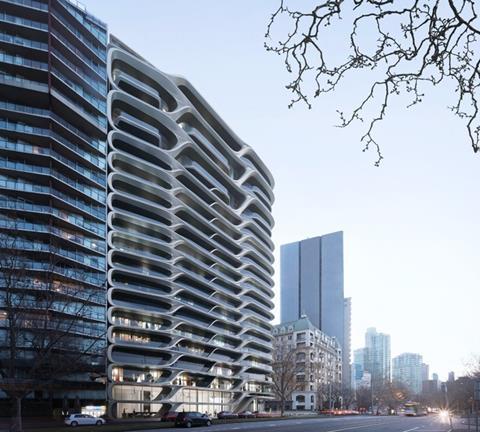 The 21-storey tower will include more than 150 flats

Over the summer, plans by the practice for a 54-storey tower in the business district of Melbourne were given planning.

The Australian city’s state government gave the 178m-tall project at 600 Collins Street the green light with the scheme including 420 apartments, offices, retail and public space.

Running across 70,000sq m, the scheme, which is being developed by Landream, will include space for more than 350 bikes.

The Victorian government’s planning minister Richard Wynne said: “It’s pleasing to see a project of this quality proposed for Melbourne and see a strong architectural response.”

ZHA is working on this scheme with local practice Plus Architecture.