Half a million homes planned on Green Belt, say campaigners 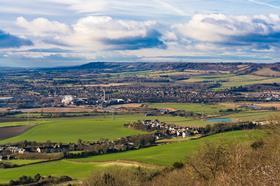 There are plans for 460,000 homes to be built on land that will soon be released from the Green Belt, according to a report published by the Campaign to Protect Rural England (CPRE).

Today’s report also says only 22% of the homes planned for land recently removed from the Green Belt will be affordable – down from 28% last year.

With local authorities under pressure to deliver more housing, many are reviewing Green Belt boundaries and freeing land for housing.

But CPRE point out releasing Green Belt land should only happen in “exceptional circumstances” and say local authorities with Green Belt land have enough brownfield sites for over 720,000 homes.

The report also said the practice of removing land from the Green Belt will continue to happen. It states that a third of local authorities with Green Belt land will find themselves with an increase in housing targets due to the revised method for calculating housing demand laid out in the National Planning Policy Framework.

Tom Fyans, director of campaigns and policy at CPRE, said: “We are being sold a lie by many developers. As they sell off and gobble up the Green Belt to build low density, unaffordable housing, young families go on struggling to afford a place to live.”