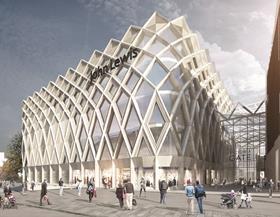 Phase one of the construction job is expected to start on site in Spring 2014.

According to construction analyst Barbour ABI, contractors including Sir Robert McAlpine, Bam Construction, Laing O’Rourke and Vinci are bidding for the job.

Hammerson achieved outline-planning consent in July 2011, and submitted detailed designs to the council in July 2013.

As well as housing more than 30 retailers, the development will anchor a 24,000m2 flagship John Lewis.

Hammerson’s director of retail development, Robin Dobson, said: “The positive decision from Leeds City Council’s plans panel is a major next step towards getting construction underway in the spring.

“We are fully committed to creating a retail development that will not only reaffirm Leeds’ status as a top retail destination for luxury and aspirational brands in the UK, but will also add value to Leeds’ local economy and community.”

Leeds City Council executive member for the economy and development Councillor Richard Lewis said, “This approval in fantastic news for the city as Victoria Gate is going to provide a huge boost to the Leeds and wider city region economies.

“The scheme will help regenerate that area of the city centre and will complement the well-established Victoria Quarter and the brand new Trinity Leeds to further enhance the exceptional retail offer in the city. Victoria Gate will also mean the creation of hundreds of new jobs to help local people and I look forward to seeing work get underway on site in the coming months to bring this development to reality.”

Hammerson achieved outline-planning consent in July 2011, and submitted detailed designs to the council in July 2013. The designs have received “overwhelmingly positive feedback” during the consultation process, Hammerson said.