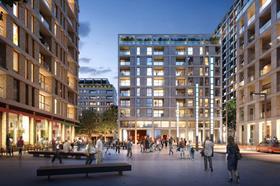 Developer Helical Bar has said it is “on track” to start the first phase of its next major development scheme at St Barts Square in London in January next year.

Reporting year end results today Helical Bar said it would start the 94-apartment first phase of the Sheppard Robson-designed scheme in January 2015 and was already planning subsequent phases which include a 200,000 sq ft office building and 121 further apartments.

Last month Helical Bar confirmed it had appointed Skanska to its £95m job to build its Creechurch Place scheme, formerly known as One Mitre Square.

Overall Helical Bar reported pre tax profit for the year to March 31 2014 of £102m, a twenty-fold increase on last year’s figures. The firm said it was achieving “super profits” from its development programme, which yielded £65m in profit.

Chairman Nigel McNair Scott said: “In May 2013 I noted we were on the cusp of returning to delivering outperformance. These results are the vindication of that belief.

“Looking forward, our London development schemes at The Bower, Old Street, Barts Square, Maple House, Clifton Street, Creechurch Place and Hammersmith Town Hall provide comfort that, in the absence of a major economic downturn, and with an investment portfolio providing growing income and capital surpluses, the Company is well placed to continue to deliver outperformance and ongoing value for shareholders.”