Flaxmill Maltings in Shrewsbury hailed as forerunner of skyscraper

Historic England is edging closer to starting work building new homes around a 220-year-old site in Shrewsbury that has been hailed as the forerunner to the skyscraper because of its cast-iron frame.

The government’s heritage watchdog is advertising for a contractor to carry out £2m of preparatory work at the Flaxmill Maltings site in Shrewsbury.

The mill closed in 1886 later being converted into a maltings before finally closing in 1987.

Historic England bought the freehold to the site in 2005 to save the buildings from ruin and four years ago opened a new visitor centre at the complex.

Now it is hoping to build dozens of homes on brownfield land surrounding the Flaxmill Maltings and has given firms until 4 October to register interest in carrying out work ahead of the housing.

This will include improving a road junction, adding new pedestrian and cycle crossings as well as demolishing some industrial buildings.

Shortlisted firms will be sent tenders on 21 October with the winning firm set to start next May.

Historic England has already completed the first phase of regeneration work on outer buildings, worth £2.5m, with the second phase seeing the maltings building fully restored at a cost of £21m, the roof having been replaced, along with the delivery of new commercial and education space.

Feilden Clegg Bradley Studios has worked on the Flaxmill scheme as strategic advisor and architect since 2003. 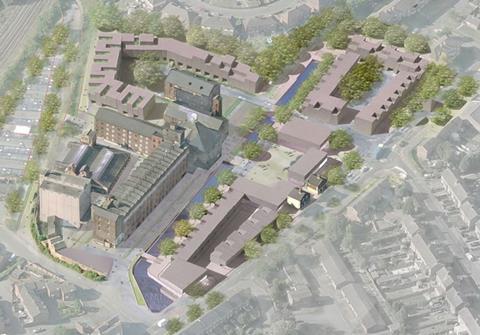