HSE to crack down on site fire risks 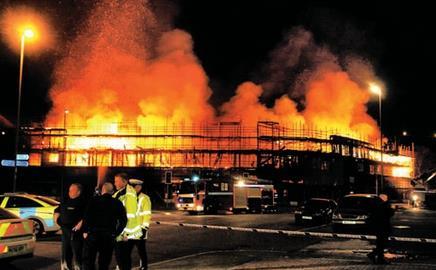 The Health and Safety Executive is planning to reduce the risk of fires on sites by clamping down on dangerous working practices, writes Thomas Lane.

The move comes after seven multistorey timber-frame developments burned to the ground in the past two years. The most recent was a six-storey block of flats in Edinburgh on 17 May.

Phil Burgess, the inspector in charge of fire and refurbishment in the HSE’s construction division said: “We’ll try to lift the profile of fire safety in construction. We’ll look at safety in general, particularly in high-risk buildings such as timber frame, refurbishment and tall buildings.”

He said breaches such as blocked emergency exits would mean the issue of a prohibition notice, closing part of a site.

Questions have also been raised over the safety of high-rise construction after it emerged that water cannot be pumped higher than 60m and that fire-fighting lifts may not have been installed at half-built towers.

The HSE, the fire brigade and the UK Timber Frame Association (UKTFA) have just completed research into the fire risks of multistorey timber-frame buildings.

The UKTFA is due to publish guidance based on this at the end of this month and said it would expel members that were found to be in breach of it. The guidelines will cover the safe storage of materials, care with hot works and the early installation of fire separation.

It also emerged this week that Barratt is to redesign some timber-frame sites in masonry.

It said this was would lead to a cost saving of 15%.

In the past two years timber prices have leapt 30%, while masonry packages have come down recently, owing to oversupply and labour shortages easing.