Work not expected to start until 2021 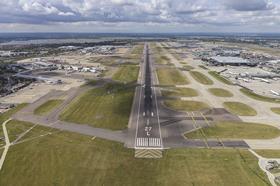 Lawyers are warning of years of legal battles before construction can start on building a third runway at Heathrow Airport.

The decision was approved this morning by a cabinet committee – chaired by prime minister Theresa May – but MPs will only get to vote on the recommendation some time in winter 2017/18 – after a public consultation on the issue.

Environmental group Greenpeace has already warned it will take legal action against the plan and Liz Jenkins, infrastructure partner at Clyde & Co, warned: “Apart from the political opposition, there will be opposition from activist local residents, local authorities and environmentalists on a host of legal, planning and regulatory issues, such as noise and emissions.”

Greenpeace executive director John Sauven admitted: “We stand ready, with four Conservative local authorities, including Theresa May’s own council, to bring a judicial review against a green light for a third runway.”

“There’s no way expansion should even be on the table when air pollution in Heathrow already exceeds legal limits,” she said. “This is a bad decision that will accelerate climate change and makes a mockery of the Government’s announcement to ratify the Paris Agreement.”

Jenkins said that giving MPs up to 18 months to look at the issues before a binding vote in the House of Commons was “excessive” and risked even more hold-ups.

She said: “Today’s announcement is a something of a false dawn. The year-long period before the government puts its decision to a vote of parliament seems excessive and likely to cause further delay.”

Giles Kavanagh, head of global aerospace at law firm Holman Fenwick Willan, commented: “This decision is an attempt to end years of uncertainty. But actually in choosing the third runway at Heathrow, this is the one option that will create more uncertainty - and be the most likely to spark legal challenges.

“The one certainty that remains is that it will be years before any shovel hits this ground.”

Meanwhile, Nicholas Dennys QC of Atkin Chambers, commented: “Major airport infrastructure projects have not always met the challenging timetable that has been set for them by politicians.

“The terminal in Doha was finally opened after more than three years of postponement for example. And so the chances of a third runway at Heathrow being delivered within the Government’s publicly stated timetable seems fanciful.”

Construction is not expected to start until 2021 ahead of the runway becoming operational four years later.

Today’s decision follows the recommendation made last summer by the Davies Commission, set up in 2012 by former prime minister David Cameron, which said expanding Heathrow was the “best answer” to the issue of increasing the country’s airport capacity.

But it recommended a series of measures be put in place to make expansion more acceptable to the local community.

“[This] includes a ban on night flights,” it said, “more reliable respite for overflown communities, a legally-enforced ‘noise envelope’, a statutory independent aviation noise authority, and a noise levy to fund a far stronger and more generous set of compensation and mitigation schemes. New measures to ensure acceptable air quality around the airport will also be needed.”