Interior design group will fit out Manchester city-centre base 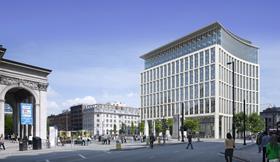 The firm was initially appointed last year to carry out due diligence reviews that culminated in the selection of Elisabeth House as its preferred location.

The building is currently under construction with the fit-out from shell and core due to start in April 2014, and an anticipated completion early 2015. KPMG will occupy the top three floors.

Jonathan Hurst, chairman of KPMG in the north, said the Manchester office had always been “something of a trailblazer” within the company, making it vital to choose the right partner.

“This appointment is one of the biggest architectural commissions in the north west for the past few years and probably for the next few years to come, and we look forward to seeing our new home take shape over the coming months,” he said.