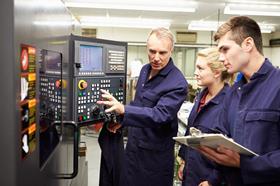 Government proposals to overhaul the controversial apprenticeship levy 18 months after the scheme was rolled out have been labelled “piecemeal and reactive” by a leading industry figure.

Announcing the reforms at the Conservative party’s annual conference in Birmingham yesterday, Chancellor of the Exchequer Philip Hammond said the proposed changes would give companies more flexibility.

An extra £90m of government funding will enable employers who pay the levy – those with an annual wage bill of at least £3m – to spend a quarter of their apprenticeship funds on people working for businesses in their supply chain, while the Institute for Apprenticeships would receive an additional £5m to introduce new standards and update existing ones so that more courses can be offered.

But Mark Farmer, chief executive of consultancy Cast and the author of the ‘Reform Or Die’ report on the future of the construction industry, said Hammond’s proposals were “the latest in a series of piecemeal and reactive modifications to the levy in gradual recognition that only 2% of UK employers pay the levy, but that training must happen in a much more diverse and SME-led supply chain, most of whom are not levy payers”.

Farmer said the new 25% cap of transferrable apprenticeship funds, up from 10%, was still too low and the slow progress around agreeing new standards, assessment methods and the funding allocations of the levy “prevented it being spent in the first place”.

There was also a risk that many of the standards already signed off and others being sought “relate to ‘here and now’ roles and not the more future-proofed skills and competences that the construction workforce will increasingly need as it enters an unprecedented period of technology-led change”. he added.

He added: “This future-proofing is the single biggest thing that the Institute for Apprenticeships should be forcing through its standards sign off process. If it does not, the government’s Industrial Strategy ambitions will be unachievable.”

Figures published in May by the education ministry showed that between August 2017 and February this year there were a total of 232,700 apprenticeship starts, compared to 309,000 in the same period the year before – a fall of 25%.