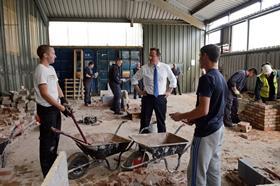 The construction industry today launches a new campaign aimed at making the case for investment in construction as a driver of growth, as new figures reveal the depth of the recession within the industry.

The campaign, which has been welcomed by the prime minister, calls for measures to address concerning industry statistics, starkly illustrated by figures released today by CITB-Construction skills:

The campaign will call for greater investment in construction to drive growth and create jobs, particularly through short-term investment in housing, repair and maintenance projects. It will also call for the government to finalise vocational education policy and support skills and training opportunities in schools, apprenticeships and into higher education.

The campaign will also lobby to ensure the government’s flagship Green Deal programme is rolled out successfully in order create a new market in “green” jobs.

Judy Lowe, deputy chairman of CITB-ConstructionSkills said: “The Construction for Growth Campaign will unite every sector of our industry in a drive to kick-start activity, work our way out of recession and remind everybody that our industry is a major contributor to economic growth.

“The government’s recent announcements have the potential to deliver a boost to the industry and create tens of thousands of jobs in the long term. But if construction and the wider economy are to reap the maximum benefit, it is essential that we make the case for immediate investment that delivers immediate results.

“There are currently 26 million UK homes in need of upgrade and repair to make them energy-efficient decent places to live in. For every job created by an infrastructure project, an additional two are generated within the repair and maintenance sector - and this is the immediate solutions required for growth.”

“That’s why the Construction4 Growth campaign is supporting Government in delivering its promises and lobbying for investment in repair and maintenance now to support the economy.

“But it’s no use doing that if we don’t have the right people. A skilled workforce is central to sustained growth in construction. Through the C4G campaign we will build on the success of the 19,000 apprentices we support each year, to develop and signpost initiatives that improve productivity, have a positive impact on growth and deliver a workforce eager and competent to exploit new opportunities.

“Perhaps the biggest opportunities - particularly for small and medium sized businesses - will come through this Autumn’s Green Deal. The Government estimates that the number of people employed in the insulation sector alone could soar from 27,000 to 100,000 by 2015 reaching a peak of 250,000 by 2022. Through Construction4Growth we will be working to ensure that the industry is ready to meet that demand.

“It is no surprise that a massive 10 per cent fall in construction output in the first part of 2012 coincided with the economy’s return to recession. The Construction4Growth campaign is our recognition that there is nothing to be gained by accepting decline and stagnation as the norm. The construction solutions are out there and we are going to make sure that we grab every opportunity available”.

For more information on the campaign, see the Construction4growth website.