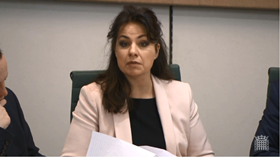 Speaking on the third day of the parliamentary inquiry into Carillion’s collapse, Allen (pictured), who sits on the work and pensions committee, said chairman of the Carillion Pension Trustee Robin Ellinson had provided evidence to the inquiry of Adam’s attitude towards pensions schemes.

Allen, who recently made headlines for saying her party was “letting Britain down”, said: “Robin Ellinson has quoted Richard Adam, the financial director at the time, as saying he considered pensions schemes were a waste of money.”

She said the comment was made at a meeting between the trustees, company and pension regulator in April 2013.

While none of the staff from the regulator facing the inquiry were at the meeting, they said the regulator had shared the trustees’ concern that the company was not taking the deficit seriously.

Section 231 gives the regulator the right to impose a contribution schedule on an employer for its pension scheme if it is not happy with the schedule agreed between the employer and the trustee.

During the hearing, pensions committee chair Frank Field slammed the regulator for its failure to intervene in the Carillion crisis before the construction conglomerate collapsed.

Field, who is co-chairing the inquiry into Carillion’s failure, questioned the regulator’s chief executive Lesley Titcomb about whether “threatening action” had been the correct plan of action.

Field said: “When you were negotiating with them they were boasting of these mega dividends. Why the hell didn’t you then use your powers?

Titcomb said: “Regulating in these circumstances isn’t just about using enforcement powers, very often it’s the threat of using those powers that brings people to the table. Difficult decisions were made at the time in terms of the revised offer from the employer and the decision was made to accept it.”

Earlier this week, it was revealed that Carillion trustees had written to the regulator in both 2010 and 2013 regarding the conflict between themselves and the company, with the second letter seeking “formal intervention”.