Interserve and NG Bailey among winners on North West frameworks

Interserve and NG Bailey are among the winners on two Procure North West Frameworks.

The Liverpool-based procurement group has awarded a host of companies spots on its services framework and a separate minor work framework called Procure North West Lite.

Interserve, T Clarke and NG Bailey were among the eight firms to land spots on the services framework.

It has been designed to allow public sector bodies across the region to procure and contract direct with regional mechanical and electrical installers.

The framework has been established to support public-sector bodies to procure contractors to deliver minor projects and work tasks across the North West Region ranging in value from £50k to £1m. 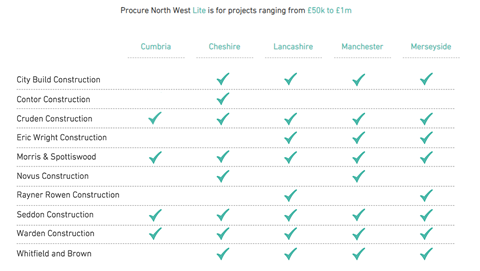 Five contractors secured places on the top lot for contracts worth £25m or more. These are Bam, Laing O’Rourke, McLaren Construction, Morgan Sindall and Willmott Dixon.

All of these firms bar McLaren were also among the eight contractors which won places on the framework’s second most valuable lot, covering jobs worth between £15m and £25m.