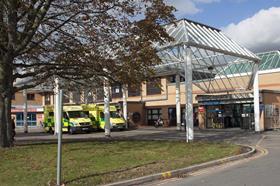 Interserve has won a £35m contract to deliver total facilities management services at a London Hospital.

Tahir Ahmed, director of estates and facilities at Barking, Havering & Redbridge University Hospitals NHS Trust said: “We have been really impressed with the way Interserve developed a unique service proposal that was tailored to our needs and environment.”

Earlier this week Building revealed the struggling firm’s construction arm was running late on a £25m scheme on a London street made famous by the Oasis album (What’s the Story) Morning Glory?

Building understands the job to turn a host of shops, including fabric retailers and record stores, into a new hotel, residential and retail, has run into problems with the groundworks.

Interserve declined to comment but scotched reports the job was up to a year late. The client client PMB Holdings was contacted for comment.

Interserve’s fit-out business Paragon will continue to target work in London but the firm’s building business is now expected to concentrate more on the regions instead including strongholds such as Birmingham.