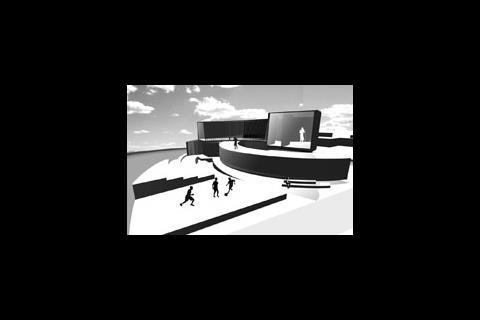 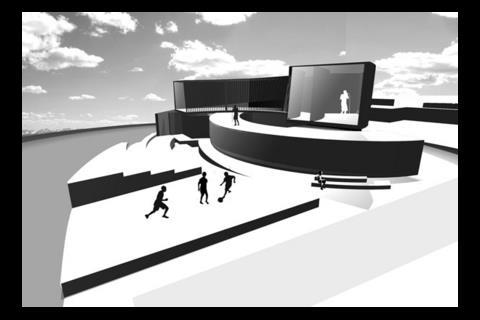 The RIBA competition for students to design the studio for Jean’s charity Yéle, was launched before the 7-magnitude earthquake struck Haiti on 12 January killing more than 200,000 people and leaving around 1.2m homeless. The UN estimates that $11.5bn must be spent on reconstruction in Haiti over ten years.

The competition winner is Christopher Morgan from Virginia Tech University in Blacksburg, Virginia, USA, who along with second place winner Tak Kei Yip, a RIBA Part II student at Foster + Partners, London and third place winner Christopher Bradley, a Post Part 1 Experience student at Norton Mayfield Architects LLP, Sheffield, will be awarded a share of a £1000 prize fund which has been donated by Allied London.

The winning design incorporates two performance spaces – one opening towards the adjacent park and nearby waterfront and another enclosed space which connects to Radio Boukman, the local radio station.

Jean, who founded Yéle, said:  “My concept for the Yéle Music Studio in Cité Soleil was to combine making music with vocational training for youth interested in the music business. After the earthquake the architectural competition to design the studio became an ‘ideas’ competition. The winning design was able to engage the community by incorporating an outdoor performance space. This connection with the local community really caught the spirit of what Yéle is all about.”

John McAslan, chairman of John McAslan + Partners, said: While the competition was initiated prior to the devastating earthquake which took place in January, its spirit is very much in keeping with the recovery efforts underway in Haiti at the moment. It is hugely important that micro-enterprise is instigated as part of the current rebuilding - helping communities to work together to create long-term change, especially for young Haitians under 21 years, who make up half the population. Clearly, it may be some time before we can realise the potential of a project such as this, while the city recovers from the immediate destruction that has occurred, however we hope that our project inspires hope that anything is possible.”