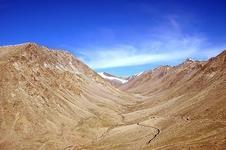 A rail line into the heart of one of the world's most inaccessible regions is nearing completion.

The Kashmir Valley line features India's longest tunnel, at 11km, and is the country's most ambitious rail project since independence - designated a project of national importance.

Part of the line opened in 2006, but two sections remain under construction, of which the segment from Qazigund to Barramulla is due to be completed this month.

The remaining 167km section, from Udhampur to Qazigund, lies in some of India's most inhospitable terrain, with no approach roads - these had to be built specially at an early stage in the project.

The alignment passes through fault zones, with several areas prone to landslips, so structures have had to be designed to cope with seismic activity. The frequency of heavy snowfall in the area provided another challenge.

The logistics of transporting construction machinery to site and the difficulty of finding skilled men willing to work in the area were further hurdles to be overcome in the line's construction.

It is hoped that the first phase of the project will be operational before the end of the year. Although it will not yet link the Kashmir Valley to the main Indian rail network, completion of the stretch between Qazigund and Baramulla will enable Kashmiris to experience inter-city rail travel for the first time.