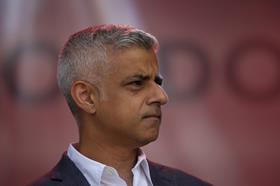 London mayor Sadiq Khan has given a Hawkins Brown housing development previously knocked back by the local council the go-ahead.

Khan (pictured) approved plans for 441 new homes on the site of a former Citroen car dealership in Brentford – of which 218 will be affordable. These include both shared ownership for first-time buyers and homes based on social rent levels for households on low incomes.

Khan made the decision to intervene after Hounslow council refused planning permission in February.

The approved scheme includes a review mechanism which means that if building is not well underway within two years of the permission being granted, the developer could be compelled to provide further affordable homes.

The council knocked back developer L&Q’s proposal over concerns the development would negatively impact local heritage sites including Kew Gardens. It includes five buildings of between 12 and 18 storeys.

Khan said: “I have carefully considered the impacts of these plans – particularly the effect on historic buildings in nearby Kew Gardens – and have concluded that the benefit of delivering more than 400 homes, including 218 genuinely affordable homes, justifies granting permission.”

This is the fifth time the current mayor has stepped in to take over an application in order to boost affordable housing.

Previous interventions have included increasing the affordable housing element from 9% to 35% at Allies & Morrison’s Hale Wharf in Tottenham, north London.