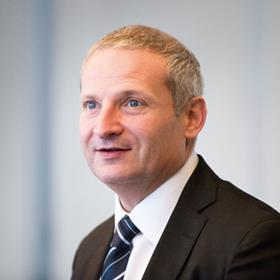 Kier has chosen an industry outsider to take over as chief financial officer because of his experience streamlining businesses – as the firm issued another profit warning.

The firm, which will release its results for the year to June next month, said turnover during the period is around £100m lower than its 2018 revenue of £4.5bn – which it says will lead to a dip in profit “broadly in line with historic gross margins”.

It added there was “significant interest” in its up-for-sale housing arm, Kier Living, which is under the hammer as part of a major restructure at the contractor by chief executive Andrew Davies which includes getting rid of 1,200 staff by the middle of next year and selling other non-core businesses.

Current finance director Bev Dew will leave Kier on 26 August after watching its share price lose more than 95% of its value since he joined at the start of 2015 – with the stock closing at a new all-time low of 61p yesterday.

Dew will be replaced by Simon Kesterton (pictured), who has worked as group finance director at listed packaging firm RPC since 2013.

Davies said: “Simon has a broad range of finance experience across a number of sectors.

“In particular, he has played a key role in implementing programmes which focus on the disposal of non-core assets, the reduction of overheads and cost control.”

The new finance chief will be tasked with reducing the firm’s debt load, with Kier’s average month-end net debt sitting at £422m for the year ended 30 June, despite a £264m rights issue last December.