A Kingspan director has denied that his failure to mention a rigged cladding test at a previous hearing of the Grenfell Inquiry was an attempt to mislead the public.

Adrian Pargeter, the Irish insulation giant’s UK director of technical, marketing and regulatory affairs, said that his “powers of recollection…deserted me” during the hearing in December last year. 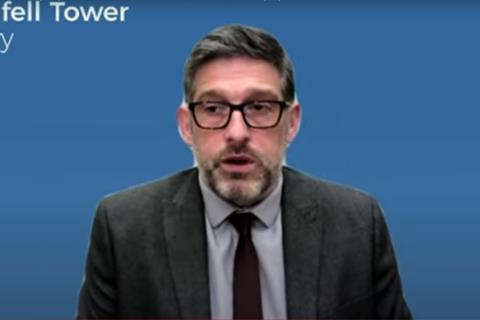 The intention was to show that non-combustible systems could also be dangerous by presenting the failed test results to a select committee of MPs investigating the dangers of cladding systems in the aftermath of the 2017 Grenfell Tower fire.

But despite internal Kingspan emails showing that flawed vertical cavity barriers had been installed in the test rig to allow flames to spread up the cladding system, the test had accidentally passed.

Asked by counsel to the inquiry Richard Millett QC if the unexpectedly successful result of the test “dealt something of a blow” to Kingspan’s lobbying strategy, Pargeter admitted that it had been “a disappointment”.

Millett then asked: “Does it remain your evidence that, despite your involvement in setting up the test, the money spent on it, in which you were involved, the surprise and inconvenience of the test passing and the blow that it dealt to your case message, you’d never recalled the successful May test when you were giving evidence on December?”

Pargeter replied: “No, I didn’t. I didn’t recall it…there’s no advantage to us, no purpose for us, for me forgetting about that at all.”

He added: “What other reason would I have for withholding that? It doesn’t make sense.”

Millett suggested that one reason might have been that before the December hearing, Pargeter had neither disclosed any documents nor mentioned “even the existence” of the test and the “blow that it dealt” to Kingspan’s case.

Asked if this would be a “good reason”, Pargeter said that he “wouldn’t have thought that”.

After the result of the May test, Kingspan’s managing director Gilbert McCarthy sent an email shown to the inquiry which said that the firm’s chief executive Gene Murtagh was “very clear that we need to pull out all the stops to convince the [the government] and anyone who wants to listen, as many independent experts and trade associations as possible, that large scale testing for everything above 18 metres is the ’right and only’ solution to ensuring maximum future public safety”.

The inquiry has already heard details of a second test carried out by Kingspan in July 2018, using a rival cladding product branded Vitracore G2 which was suspected to be likely to fail a large-scale test despite being rated a product of ‘limited combustibility’.

The test resulted in the desired outcome of a failure, which Kingspan then passed on to both the government and the select committee, as well as the BBC.

But they did not disclose the details of the earlier May test, with Pargeter admitting to yesterday’s hearing that Kingspan had “told no one of its existence”.

Millett then put it to Pargeter that the reason he had not mentioned the May test to the inquiry was for the same reason: “your plan was always to conceal the fact of and result of the May test from both the Inquiry and the public.” Pargeter said that this was not true.

Millett then said: “And it was only once it had been put to you in evidence that the July test was similarly part of an attempt to mislead the select committee that you chose to come clean, as you would have it, about the May test and sought to put the record straight.”

Pargeter again denied this and said it was not true.

After being told about the July test, the government carried out further tests on Vitracore G2 which confirmed that the version of this product being sold on the market was different to what had been tested because it contained more adhesive in its bonding.

The hearing was shown internal Kingspan emails from September 2018 in which staff said that the government had “killed” the May test, adding that this had been “our most powerful test”.

Asked by Millett if Pargeter understood this to mean that the government’s actions had made the July test “useless for Kingspan’s lobbying purposes”, Pargeter replied: “Potentially.”

The inquiry has already heard that the version of Kingspan’s K15 insulation, which was found to have been included in the cladding system of Grenfell Tower after the fire which claimed 72 lives in June 2017, on the market was also different to what had been tested.

Kingspan had changed the chemical composition of the insulation in 2006, a year after the successful 2005 fire test which was then used in the product’s marketing literature for nearly fifteen years before the test report was withdrawn in October last year.

A 2007 fire test of the newer, changed version of K15 had turned a laboratory into a “raging inferno” which had to be extinguished before the end of the test out of fears that it would endanger the laboratory.